Battle of Jena-Auerstadt facts for kids

The Battle of Jena-Auerstadt was fought on October 14, 1806. It was part of the War of the Fourth Coalition. It was fought between the French and the Prussians. The battle was a victory for Napoleon of France and he conquered Prussia.

In 1806 the Fourth Coalition was formed by Great Britain, Sweden, Russia, and Prussia against Napoleon and France. Napoleon invaded Prussia in the fall. Charles William Ferdinand, Duke of Brunswick-Wolfenbüttel commanded the Prussians at Jena-Auerstadt. He was 71 years old while his field commanders were in their 60s. The Prussian army was still using tactics and training of Frederick II of Prussia. Its greatest weakness was its staff organization. Most of the divisions were poorly organized and did not communicate well with each other. Napoleon's army was experienced and well led. The armies met at Jena-Auerstadt on October 14, 1806.

The Prussian army was split into three forces 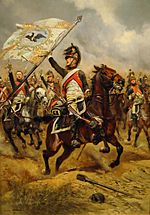 French dragoon with a captured Prussian flag at Jena

The first French movements were to attack the Prussian flanks. Once in position, Marshal Ney attacked without orders. At first Ney's attack was successful, but he was soon cut off and under attack by the Prussians. Napoleon sent Marshal Lannes to help out. The French center was left weak, however, Napoleon deployed the Imperial Guard in the center and kept the Guard under his direct command. The rescue worked and Ney units were able to retreat. The Prussians did not take the initiative and attack. At 1 P.M. Napoleon made his move. The French flanks pushed hard against the Prussian flanks, and the French center attacked the Prussian center. The flank attacks worked and Prussians fled. They lost 10,000 men, 15,000 men were taken prisoner and 150 cannons were lost.

Marshal Davout's III Corps was at the small village of Auerstedt. The Duke of Brunswick attacked with 60,000 men. However, the Prussians made piecemeal attacks, and the French held them off for 6 hours. Brunswick was mortally wounded and Prussian command broke down. The French destroyed the last Prussians assault and won the battle.

At the end of the day Napoleon still did not know what was going on. Instead of directing his corps commanders he took charge himself. He forgot to send orders to several of his corps. He thought he had defeated the entire Prussian army when in fact he had only partially defeated them. There was still a large Prussian army of about 100,000 who were not in the battle. Napoleon didn't think Davout had completely beaten the Prussians and said "tell your marshal he is seeing double", a reference to Davout's bad eyesight. Davout was made Duke of Auerstadt. The French Army marched into Berlin and then peace terms were signed between France and Prussia.

All content from Kiddle encyclopedia articles (including the article images and facts) can be freely used under Attribution-ShareAlike license, unless stated otherwise. Cite this article:
Battle of Jena-Auerstadt Facts for Kids. Kiddle Encyclopedia.