Battle of Kaiapit facts for kids 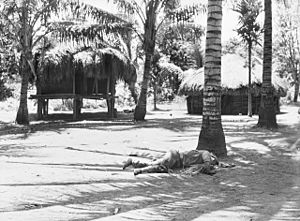 The Battle of Kaiapit was fought in 1943 between Australian and Japanese forces in New Guinea during the Finisterre Range campaign of World War II. Following landings at Nadzab and at Lae, the Allies attempted to exploit their success with an advance into the upper Markham Valley, starting with Kaiapit. The Australian 2/6th Independent Company flew into the valley from Port Moresby in 13 USAAF C-47 Dakotas, making a difficult landing on a rough airstrip. Unaware that a much larger Japanese force was also headed for Kaiapit and Nadzab, the company attacked the village on 19 September to secure the area so that it could be developed into an airfield. They then held it against a strong counterattack. During two days of fighting the larger force, the Australians suffered relatively few losses. Their victory at Kaiapit enabled the Australian 7th Division to be flown into the upper Markham Valley, stopping the Japanese from threatening Lae or Nadzab, where a major airbase was being developed. The victory also led to the capture of the Ramu Valley, which provided new forward fighter airstrips for the air war.

All content from Kiddle encyclopedia articles (including the article images and facts) can be freely used under Attribution-ShareAlike license, unless stated otherwise. Cite this article:
Battle of Kaiapit Facts for Kids. Kiddle Encyclopedia.