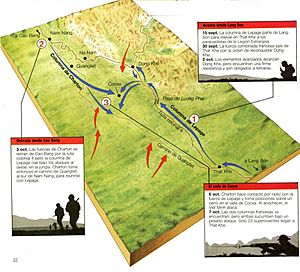 Battle of Route Coloniale 4 was a campaign in the First Indochina War carried out by the Việt Minh Army from 16 September to 17 October 1950 to break the isolation of the Việt Bắc base, clear the Vietnam-China border Bridge to receive aid. Another objective was to expand the base and destroy some of the French garrison force, experimenting with tactics for the People's Army of Vietnam at that time with little experience in combat.

During the same five years, the Việt Minh also adopted overseas Vietnamese organizations in France and left-leaning organizations to fight politics strongly influencing the French people's rising resistance to Indochina War. France fell into an unprecedented political crisis. The Vietnamese State lacked credibility among the people as a puppet government, and its army was too weak to cooperate with French troops in Indochina to win the war. The French government was forced to take into account the US government's plan to accept economic and military aid to pursue the war.

However, after five years of war French troops in Indochina became more and more bogged down in defense. In addition, although the development of the native force, but the quality and the fighting spirit is low it is almost impossible to undertake military tasks instead of the French.

All content from Kiddle encyclopedia articles (including the article images and facts) can be freely used under Attribution-ShareAlike license, unless stated otherwise. Cite this article:
Battle of Route Coloniale 4 Facts for Kids. Kiddle Encyclopedia.