Battle of Shiroyama facts for kids 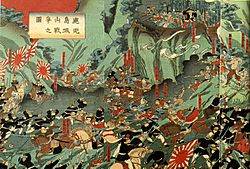 The Battle of Shiroyama (城山の戦いcode: ja is deprecated , Shiroyama no tatakai) took place on 24 September 1877, in Kagoshima, Japan. It was the final battle of the Satsuma Rebellion against the Imperial Japanese Army. The battle ended in the death of the Revolt's leader, Saigō Takamori, and the destruction of his army.

All content from Kiddle encyclopedia articles (including the article images and facts) can be freely used under Attribution-ShareAlike license, unless stated otherwise. Cite this article:
Battle of Shiroyama Facts for Kids. Kiddle Encyclopedia.