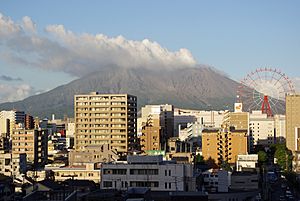 Kagoshima skyline in front with Sakurajima in the background

Kagoshima (鹿児島市code: ja is deprecated , Kagoshima-shi) is a Japanese city in Kagoshima Prefecture on the island of Kyushu. It is the capital city of the prefecture.

Kagoshima is at the southwestern tip of Kyūshū.

It has been recognized as a core city since 1996.

Kagoshima was the center of Satsuma Province and the land of the Shimazu clan.

All content from Kiddle encyclopedia articles (including the article images and facts) can be freely used under Attribution-ShareAlike license, unless stated otherwise. Cite this article:
Kagoshima, Kagoshima Facts for Kids. Kiddle Encyclopedia.