Battlefield House near King Street East and Centennial Parkway in Stoney Creek, Hamilton, Ontario, Canada is a living history museum and site of the historic Battle of Stoney Creek on June 6, 1813, which was fought during the War of 1812. It was built in 1796. The house and 15.5 acres (6.3 ha) of parkland (Battlefield Park), were the property of the Women's Wentworth Historical Society, (1899-1962), and given by this society to the Niagara Parks Commission on January 19, 1962. The park was designated a National Historic Site of Canada in 1960.

Nestled under the Niagara Escarpment, this historic site is located on 32 acres (12.9 ha) of park land linked to the Bruce Trail. Also located on the property are the Battlefield Monument and the Grandview (Nash-Jackson House) building. Smith's Knoll Cemetery is also nearby, across King Street East from the park. During the first weekend in June, a re-enactment of the Battle of Stoney Creek is held with re-enactors in full regalia, representing both the British and American sides. The 2016 event was the 35th such re-enactment.

British units made a night attack on an American encampment. Due in large part to the capture of both American brigadier generals, and an overestimation of British strength by the Americans, the battle was a victory for the British, and a turning point in the defence of Upper Canada. 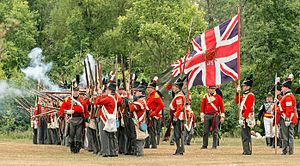 All content from Kiddle encyclopedia articles (including the article images and facts) can be freely used under Attribution-ShareAlike license, unless stated otherwise. Cite this article:
Battlefield House (Stoney Creek, Ontario) Facts for Kids. Kiddle Encyclopedia.