The Bay City Downtown Historic District is a primarily commercial historic district, located in Bay City, Michigan and roughly bounded by the Saginaw River, Second Street, Adam Street, and Center Avenue. It was listed on the National Register of Historic Places in 1985.

Bay City was founded in the mid-1840s, and the first commercial establishment began admitting customers in 1850-51. The initial commercial development in Bay City, in the 1850s and 1860s, occurred along North Water Street, adjacent to the lumbering businesses along the river. Third Street, linked to West Bay City via a bridge over the river, also became an important commercial artery, as did Center Avenue. The first brick building was constructed in 1862, and fire regulations put in place after a disastrous 1865 fire ensured further buildings would be brick.

The streets were paved in the 1870s and 1880s, at the same time that the city was exploding in size, with over 25,000 residents in 1884. As the city and the commercial district grew, development shifted east to Washington. New construction continued through World War I, and additional construction was implemented even later. 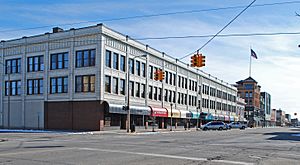 The Bay City Downtown Historic District consists of 91 structures: 90 of which are commercial, and one government building. Sixty-seven of the buildings contribute to the historic character of the district. The district occupies about 16-1/2 square blocks in the northwest portion of Bay City's downtown. The structures in the district date from the Civil War through the early 1930s, and include a variety of styles, from Italianate Commercial Palaces to Romanesque commercial blocks, early 1900s Colonial Revival buildings and Modern designs.

Some of the most significant structures in the district include:

All content from Kiddle encyclopedia articles (including the article images and facts) can be freely used under Attribution-ShareAlike license, unless stated otherwise. Cite this article:
Bay City Downtown Historic District Facts for Kids. Kiddle Encyclopedia.