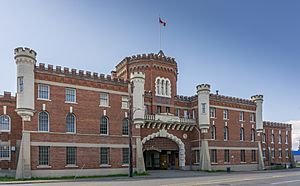 The Bay Street Drill Hall was completed in 1915. It was created to provide training facilities for local militia units such as the Fifth Regiment of artillery, as well as to provide a home for two newly formed units, the 50th Gordon Highlanders of Canada and HQ Military District No. 11. The Armoury was designed by architect William Ridgway Wilson, (1863-1957).

In its earlier years the armoury had more extensive use for public events as modern public facilities in Victoria had not yet been built.

It was designated a historic building in 1989. it is a two-storey drill hall with Tudor Revival elements, built during the 1896 to 1918 period when over 100 drill halls and armouries were erected across Canada; its scale reflects the dramatic increase in military participation following Canada's performance during the Second Boer War.

The 5th (BC) Artillery Regiment Museum is located in the armoury. The museum's artefacts reflect the history of 5th (British Columbia) Field Artillery Regiment, RCA and associated units from 1861 to the present day. Exhibits include field artillery and cannons, uniforms, band instruments, medals, weapons, insignia, photographs and more. The museum is open on Tuesday evenings.

All content from Kiddle encyclopedia articles (including the article images and facts) can be freely used under Attribution-ShareAlike license, unless stated otherwise. Cite this article:
Bay Street Armoury Facts for Kids. Kiddle Encyclopedia.