The Beach Tower located in Jenkins Lane car park, Waterford is a 15th century crenelated building which is part of the city defences. It was built on a rocky outcrop overlooking the River Suir and forms a natural defensive position. 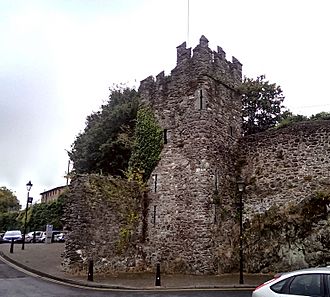 The Beach Tower which was part of the medieval defences of the City of Waterford, Ireland

The tower is an excellent observation post with uninterrupted views both upriver to Granagh Castle and downriver beyond Reginald's Tower. From the city's defensive point of view this was important as attacks from the river occurred occasionally and in particular the fear was of a Spanish landing. It also enabled the observers to keep an eye on the city docks from above.

The tower, which was substantially rebuilt during the early 17th century, was a bastion citadel. It had a rectangular shape with corner bastions which are typical of 17th century forts in Ireland.

All content from Kiddle encyclopedia articles (including the article images and facts) can be freely used under Attribution-ShareAlike license, unless stated otherwise. Cite this article:
Beach Tower, Waterford Facts for Kids. Kiddle Encyclopedia.