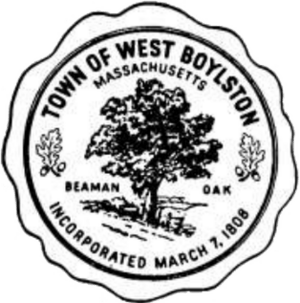 The Beaman Oak is within the seal of West Boylston

The Beaman Oak was the largest white oak tree in the Commonwealth of Massachusetts. It stood in the front yard of a colonial era three-story house in the town of Lancaster. It was so named because Gamaliel Beaman had originally settled the spot in 1659. The oak became known as a prominent landmark in Central Massachusetts and is featured prominently on the town seal of West Boylston.

The oak's trunk was partially hollow towards the end of its life. After a storm severely damaged it, the tree was cut down in 1989.

All content from Kiddle encyclopedia articles (including the article images and facts) can be freely used under Attribution-ShareAlike license, unless stated otherwise. Cite this article:
Beaman Oak Facts for Kids. Kiddle Encyclopedia.