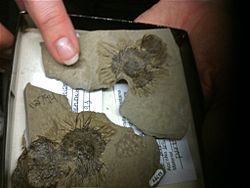 The Bear Gulch Limestone in Montana is a fossiliferous lagerstätte, a limestone layer laid down in the Bashkirian Stage of the early Pennsylvanian epoch of the Carboniferous period, about 318 mya.

This lens of limestone was laid down in a surrounding matrix that indicates a landscape of mudflats and braided channels (linear sandstone seams) in fresh and brackish water, in an arid climate (gypsum formation). Magnetic orientation of particles relative to the bedding planes of the strata suggest a latitude of about 12°N, a tropical siting.

In the Bear Gulch Limestone, many genera of fossil fishes and some invertebrates were occasionally preserved in detail when they died and sank to the bottom of a shallow marine or estuarine lagoon. In such cases, conditions on the silty bottom preventing the usual bacterial decomposition are usually invoked, characterized as close to anoxic, thus suppressing ordinary bacterial decomposition; however, fossils of fishes of distinctly bottom-dwelling type are present, and traces of worm burrows or similar bottom disturbance show that sufficient oxygen was available in the upper levels of bottom silt. Pulses of hypoxic or anoxic conditions and perhaps periodic episodes of heavy siltation—the lagoon laid down up to 90 ft/30 m of limestone during its existence— may have been involved.

The numerous genera and many body types represented by fossils are witnesses to a highly diversified paleoecology with many available niches to be filled by specialist fauna.

All content from Kiddle encyclopedia articles (including the article images and facts) can be freely used under Attribution-ShareAlike license, unless stated otherwise. Cite this article:
Bear Gulch Limestone Facts for Kids. Kiddle Encyclopedia.