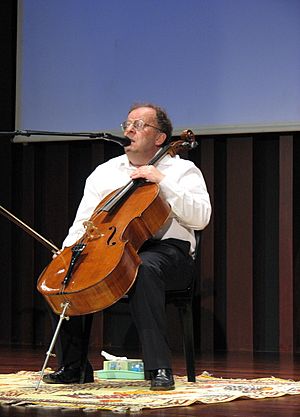 Beat Richner (13 March 1947 – 9 September 2018) was a Swiss pediatrician and cellist. He was born in Zurich. He was the founder of children's hospitals in Cambodia. He created the Kantha Bopha Foundation in Zurich in 1992 and became its head. He and another expatriate oversee and run the predominantly Cambodian-manned hospitals.

As both a cellist and a medical doctor, Richner was known by patients, audiences, and donors as "Beatocello".

All content from Kiddle encyclopedia articles (including the article images and facts) can be freely used under Attribution-ShareAlike license, unless stated otherwise. Cite this article:
Beat Richner Facts for Kids. Kiddle Encyclopedia.