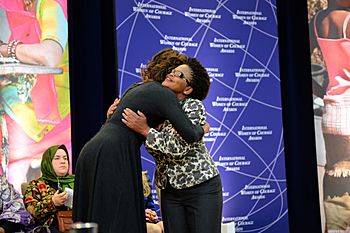 Beatrice Mtetwa is a lawyer from Zimbabwe. She is known internationally because she represents journalists and because she speaks to support press freedom. In 2008, The New York Times said she was "Zimbabwe's top human rights lawyer". In 2014, she received an International Women of Courage Award from the U.S. Department of State.

Mtetwa received her LLB (Bachelor of Laws) degree from the University of Botswana and Swaziland in 1981. She spent the next two years working in Swaziland as a prosecuting attorney (a lawyer who is responsible for starting legal cases against people accused of crimes). In 1983, she moved to Zimbabwe. There she worked as a prosecutor until 1989. That year, she went into private practice (a professional business that is not controlled or paid for by the government). She began to limit her business to one subject, the practice of human rights law. In one of her more famous cases, she questioned a section of Zimbabwe's law, the Private Voluntary Organizations Act. She won the case. The law allowed the government to change the group of people who manage or direct non-governmental organizations. She also questioned the results of 37 districts in the parliamentary elections. In a PBS documentary, Mtetwa said the reason for her activism is "not because there is any glory or cash to it and not because I'm trying to antagonize the government... I'm doing it because it's a job that's got to be done".

Mtetwa is especially famous because she defends local and international journalists. In 2003, for example, she got a court order, a formal statement from a court to stop the government from forcing Guardian reporter Andrew Meldrum to leave the country. She gave the order to security officials at Harare International Airport only minutes before Meldrum's plane left. She also helped reporters Toby Harnden and Julian Simmonds from London's Sunday Telegraph newspaper. They were arrested during the Zimbabwean April parliamentary election. The government said the reporters did not have official approval. The court said they were not guilty. In April 2008, she helped New York Times reporter Barry Bearak get out of jail. He was arrested for similar reasons. Mtetwa also defended many local journalists who were in jail before the 2008 Zimbabwean presidential election.

In 2003, police arrested Mtetwa. They said it was for drunk driving. At the police station, they hit her and choked her, or tried to stop her breathing by squeezing her throat. Three hours later, the police let her go, without a formal charge or accusation. For two days after the attack, she could not speak. On the third day, she returned with a folder of medical evidence, and she filed charges against the police officers. Police officers reportedly attacked Mtetwa again in 2007. Police beat Mtetwa and three colleagues, people who work with her, with rubber nightsticks during a protest march. The march was to protest the harassment of Zimbabwe's lawyers.

In an interview with the Committee to Protect Journalists, Mtetwa said how she tries to prevent attacks:

"I think I confront the danger immediately before it happens. I always make sure that if, for instance, I'm called in the middle of the night to a scene that is potentially dangerous, I make sure that there are as many media practitioners as possible, particularly to record what will happen there. And in the glare of cameras I find that people don't want to do what they would want to do. So in a lot of ways I think I've been lucky, and I haven't received as much harassment as one would have expected, or as much as other human rights defenders have had."

In 2005, Mtetwa won the International Press Freedom Award of the Committee to Protect Journalists. The award citation said that "in a country where the law is used as a weapon against independent journalists, Mtetwa has defended journalists and argued for press freedom, all at great personal risk." In 2008, she also won the group's Burton Benjamin Memorial Award for Lifetime Achievement.

Mtetwa received several awards from legal organizations. In 2009, the European Bar Human Rights Institute gave her the Ludovic-Trarieux International Human Rights Prize ("The award given by lawyers to a lawyer"). That award is given each year to a lawyer who, throughout his or her career, has illustrated, by activity or suffering, the defence of human rights in the world. Mtetwa won the 2010 International Human Rights award of the American Bar Association. In 2011, she received the Inamori Ethics Prize from Case Western Reserve University in the US. In 2014, she received the International Women of Courage Award.

St. Francis Xavier University in Nova Scotia, Canada, was the first university to celebrate Mtetwa's many achievements. They gave her an honorary degree in 2013.

All content from Kiddle encyclopedia articles (including the article images and facts) can be freely used under Attribution-ShareAlike license, unless stated otherwise. Cite this article:
Beatrice Mtetwa Facts for Kids. Kiddle Encyclopedia.