Beatriz Argimón Cedeira (born 14 August 1961) is a Uruguayan notary and politician of the National Party (PN) serving as Vice President of Uruguay since March 1, 2020, being the first woman elected to that position. She served as a deputy for Montevideo Department between 2000 and 2010.

Graduated from the University of the Republic, she also studied human rights, family law, and juvenile law. She has been a member of the National Party Board since 2009.

Beatriz Argimón began her militancy in 1977 at age 16, and after 30 years she has held positions as councillor and deputy of the Republic. She is an advocate for women's rights in the Chamber of Representatives, and together with other representatives has worked to defend the rights of women in need. She was one of the founders of the "Political Women's Network" and the "Bicameral Women's Caucus" of the Uruguayan parliament. 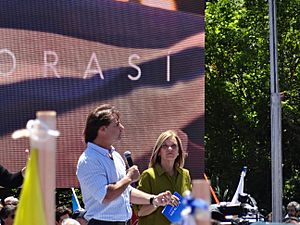 Luis Lacalle Pou (left) and Beatriz Argimón (right) during an act in Montevideo.

During the presidential term of the nationalist Luis Alberto Lacalle, she was director of the National Institute of Minors (INAME), currently INAU [es]. Together with Julia Pou, she founded the Acción Comunitaria group (Lista 400 [es]) and was elected deputy for the term 2000–2005. Later she joined the Wilsonist Current, returning to be elected deputy for the term 2005–2010. She became the first woman reelected consecutively in the history of the National Party.

In the course of 2007, Argimón declared herself independent within the PN. In the 2009 presidential primaries she presented her own list (2018), which supported the candidacy of Jorge Larrañaga.

In 2014, she supported the candidacy of Dr. Luis Lacalle Pou for the Presidency of the Republic, having served as one of his alternates in the Senate. She is currently Secretary of the National Party's board of directors for sector list 404. On 16 April 2018, she became the first woman president of the National Party. In the 2019 presidential primaries, Luis Lacalle Pou won by 53% of the votes. He named Argimón as his vice presidential running mate for the October elections.

All content from Kiddle encyclopedia articles (including the article images and facts) can be freely used under Attribution-ShareAlike license, unless stated otherwise. Cite this article:
Beatriz Argimón Facts for Kids. Kiddle Encyclopedia.