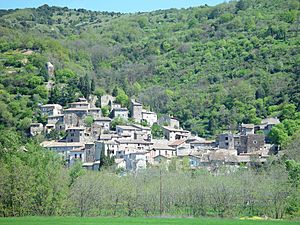 View of the village

Beauchastel is a town and commune of the Ardèche département, in the southern part of France.

The name of the village comes from the "Bel Castrum" castle, built in the 12th century by the Lords Retourtour and Briand. It was ruined during the French Wars of Religion, and today only the tower remains. In the 17th and 18th centuries, Beauchastel was one of the last salt stores (grenier à sel) of the country.

All content from Kiddle encyclopedia articles (including the article images and facts) can be freely used under Attribution-ShareAlike license, unless stated otherwise. Cite this article:
Beauchastel Facts for Kids. Kiddle Encyclopedia.