The Beaver Lake (French: Lac aux Castors) is an artificial basin fitted in 1938 on a former swamp located on the Mount Royal, in Montreal, Quebec, Canada. It was designed by architect Frederick Todd.

It takes its name from an old beaver dam discovered during the work.

About 200 metres (660 ft) by 150 metres (490 ft), Beaver Lake is shaped like a four-leafed clover. It was traditionally used an outdoor rink in winter, but this practice was ended in 2017 and skating now takes place on an artificial rink nearby.

The surroundings of the lake are equipped for various recreational activities: skating and sliding in the winter, vast lawns in summer. 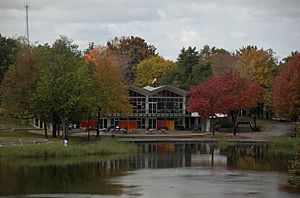 Beaver Lake pavilion was inaugurated in 1961

Built between 1956 and 1958, inaugurated in 1961, the pavilion is located west of the lake. Designed by architects Hazen Sise and Guy Desbarats of montreal-based architectural firm Arcop, it was considered one of the most innovative buildings in Montreal, with a corrugated roof and large windows. It was renovated in 2005-2007.

The pavilion houses a restaurant named The Pavilion.

In 2007, the Ordre des architectes du Québec (Order of Architects of Quebec) awarded the Excellence Award in architecture to architects Pierina Saia and Réal Paul and to the City of Montreal for the conservation and heritage restoration of the Beaver Lake pavilion.

All content from Kiddle encyclopedia articles (including the article images and facts) can be freely used under Attribution-ShareAlike license, unless stated otherwise. Cite this article:
Beaver Lake (Montreal) Facts for Kids. Kiddle Encyclopedia.