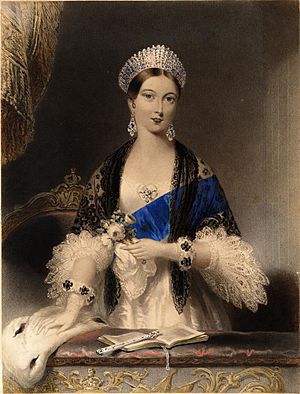 Bedchamber crisis is the name given to a number of events that happened in 1839, when the Whigs lost the election, and only had a minority rule. As a consequence of the defeat, Lord Melburne stepped down, and Robert Peel was given the task to form a new government. The Bedchamber crisis relates to the behaviour of Queen Victoria, who was twenty years old, at the time. The queen had a close relationship with the prime minister, and also listened to him, when it came to choosing Ladies-in-waiting. As a result, most ladies in waiting were the wives or relatives of leading Whig politicians. Peel who was in the Tories asked the queen to re-elect the ladies, so that their allegiance to parties would be more neutral. This would have meant that some of the ladies would have to be replaced. Victoria saw the ladies as friends, and therefore refused. In addition, the queen had little sympathy for Peel. Given the circumstances, Peel refused the task to form a new government. Lord Ashley, who was to become Lord Shaftsbury was offered the post of prime minister, but he also refused. As a result, the Whigs and Lord Melbourne stayed in power. The refusal of the queen to replace some of the ladies in waiting was met with criticism.

All content from Kiddle encyclopedia articles (including the article images and facts) can be freely used under Attribution-ShareAlike license, unless stated otherwise. Cite this article:
Bedchamber crisis Facts for Kids. Kiddle Encyclopedia.