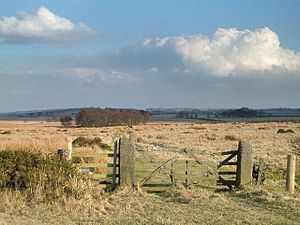 Beeley Moor is a small gritstone upland area in the Derbyshire Peak District of central and northern England, near the villages of Beeley and Baslow. Its highest point is 371 metres (1,217 ft) above sea level. 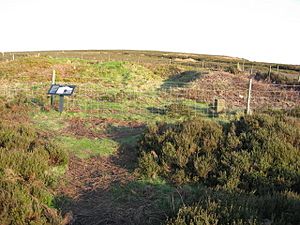 Hob Hurst's House is an unusual square Bronze Age burial cairn on Harland Edge (between Gibbet Moor and Beeley Moor). Thomas Bateman excavated the barrow in 1853 and discovered a stone cist containing cremated remains. It has been a protected national monument since 1882. The site was named after a goblin who was supposed to have lived there.

Three hundred years ago coal was mined on Beeley Moor for lead-smelting and for local homes. Chatsworth House was built from the high quality gritstone quarried on the moor. Beeley Moor was also renowned for grouse shooting.

Beeley Moor became "Open Access" land for the public, following the Countryside and Rights of Way Act 2000. The area can be accessed from Beeley Village by footpaths through Beeley Plantation.

All content from Kiddle encyclopedia articles (including the article images and facts) can be freely used under Attribution-ShareAlike license, unless stated otherwise. Cite this article:
Beeley Moor Facts for Kids. Kiddle Encyclopedia.