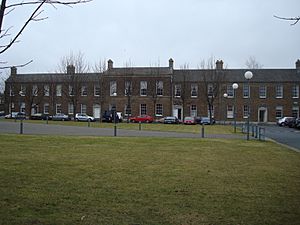 Beggars Bush is the site of a former barracks on Haddington Road in Dublin City South (Dublin 4), Ireland, as well the surrounding area and a nearby pub. The barracks were bordered to the east by Shelbourne Road, which used to be the western bank of the River Dodder.

The British Army used the barracks, which dated from 1827, as a recruit training depot for the garrison in Ireland. The barracks was handed over to Michael Collins and the Free State military on 31 January 1922, the first British barracks to be handed to the new Provisional Government. Robert Erskine Childers was executed in the barracks on 24 November 1922. The army closed the barracks in the 1920s.

The open square just inside the main gate was the infantry parade ground, and was surrounded by the infantry and cavalry (on the left) quarters.

Further in there is the clock tower. At the back on the right there was the barracks chapel (now a museum), next to that was the quartermasters house. Further east the cook house and at the far east end the hospital.

Several organisations are based in the barracks:

All content from Kiddle encyclopedia articles (including the article images and facts) can be freely used under Attribution-ShareAlike license, unless stated otherwise. Cite this article:
Beggars Bush, Dublin Facts for Kids. Kiddle Encyclopedia.