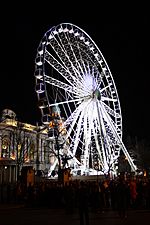 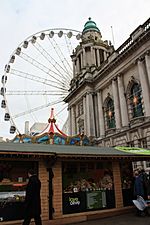 The Belfast Wheel was a 60-metre (200 ft) tall transportable Ferris wheel installation in the centre of Belfast, Northern Ireland, in the grounds on the east side of Belfast City Hall. It operated from November 2007 to April 2010.

The Belfast Wheel was brought to Belfast in partnership with Belfast City Council and the Department for Social Development. It was operated by World Tourist Attractions.

It opened in November 2007 and operated seven days a week. Views right across Belfast and Belfast Lough could be seen from the 42 fully enclosed climate controlled capsules which rose to a height of almost 60 metres, on an approximately 13 minute trip. A VIP capsule with DVD, glass floor and champagne on ice was also available.

In May 2009, Belfast City Council voted to keep the big wheel on site for a further two years, from 1 September 2009. Subsequently, the Belfast Titanic Society objected to plans for the Belfast Wheel to remain at its current location because it obscured the Titanic Memorial. The structure of the wheel stood around and on top of the memorial, and the Society had proposed that the memorial be relocated to the north eastern corner of the City Hall grounds. On 30 November 2009, the location of the Belfast Wheel again caused a row, resulting in the Lord Mayor of Belfast Naomi Long discussing the potential move of the Titanic Memorial before the 2012 anniversary.

The Belfast Wheel closed for business on Sunday 11 April 2010. The operator, Great City Attractions, had announced a few weeks previously that it would be removed as the Environment Agency had objected to the wheel staying any longer, in order to ensure it did not become a permanent feature beside a listed building. Talks about moving the wheel to Belfast's Titanic Quarter came to nothing. The final ride was at 1800 BST.

On 22 June 2009 a 38-year-old man wearing only a pair of shorts climbed to the top of the wheel, which was brought to a standstill, trapping tourists for over three hours. The man, a member of the traveller community engaged in a caravan protest over accommodation, was eventually brought back to the ground by a specialist team of firefighters and charged with disorderly behaviour and false imprisonment.

All content from Kiddle encyclopedia articles (including the article images and facts) can be freely used under Attribution-ShareAlike license, unless stated otherwise. Cite this article:
Belfast Wheel Facts for Kids. Kiddle Encyclopedia.