Following the announcement in February 2008 of the formal demise of the original 1867 chartered Belfast and Moosehead Lake Railroad Company (1871–2007) by its then private not-for-profit operator, the Belfast & Moosehead Lake Railroad & Preservation Society based in Unity, Maine, the BPS was incorporated as an all-volunteer non-profit 501(c)(3) organization to purchase the MEC-built 1892 B&MLRR station house in Brooks (MP 12.27) to save and preserve it as an historic railroad structure. 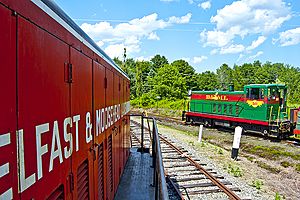 In the months that followed, the BPS acquired several pieces of surviving B&MLRR rolling stock including the road's two still operating 1940s vintage 70-short-ton (63-long-ton; 64 t) GE diesel-electric locomotives: BML#50 that had been bought new by the road in November 1946 to provide the line the first non-steam power to ever operate over its 33-mile (53 km) grade from Belfast to Burnham Junction, and BML#53 that had been acquired by the BML in 1970 from Vermont's Montpelier and Barre Railroad. A track inspection car, open-air observation car, 1926-vintage ex-DL&WRR Pullman-built chair car, ex-MEC stainless steel coach/cafe car, and an ex-MEC caboose were later added to the equipment roster.

In February 2009, the BPS entered into a lease agreement with the Maine Department of Transportation (MDOT) to operate over the State-owned 30-mile (48 km) portion of BML grade running inland from the Belfast/Waldo town line (MP 3.14) to Burnham Junction (MP 33.07) and early that July began operating weekend excursion trains between Brooks (MP 12.27) and Waldo (MP 7.15). The following November the BPS leased the remaining three miles (4.8 km) of grade within the Belfast city limits between the Belfast/Waldo town line and the Penobscot McCrum property line under the US Rt. 1 bridge from its still then owner, Unity Property Management (UPM). This permitted the BPS to establish regular seasonal excursion service from the Upper Bridge (MP 1.2) to Waldo.

In July 2010, the City of Belfast purchased the UPM-owned portion of the grade within the city limits in order to preserve the corridor and with the intention of developing it as a public multi-use rail trail. While exploring how to design and finance such a rail trail, however, the City also agreed to continue to lease that portion of the grade during the interim on a year-to-year basis to the BPS to operate seasonal trains inland from its Upper Bridge station. 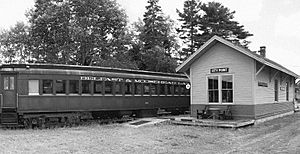 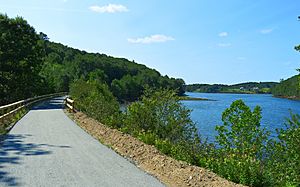 After two seasons of operations from the Upper Bridge, however, the City cancelled the lease with the BPS in October 2012, and four months later formally applied to the Surface Transportation Board of the US Department of Transportation and the US Department of the Interior for permission under the National Trails System Act (16 USC§1241 et seq.) to "railbank" their portion of the grade from the Belfast waterfront at Pierce Street up to the turnout to the privately owned City Point Central Railroad Museum at MP 2.5 next to the Oak Hill Road grade crossing.

The loss of the lease with the City forced the BPS to relocate the railroad's excursion train service in 2013 to the 19th century station house at the City Point Museum site, a property which the BPS subsequently purchased from its long-time private owner. The remaining 0.64 miles (1.03 km) of City-owned grade from the City Point turnout to the Belfast/Waldo town line as well as the 30 miles (48 km) of State-owned grade beyond continues to be available to the B&MLRR over which it now operates its scheduled seasonal weekend excursion service from the City Point station to the bogs beyond Waldo, as well as other special event runs and group charters over that and other parts of the line.

In late September 2014 the City began the process of pulling up and scrapping the grade's over 300 short tons (268 long tons; 272 t) of late 19th and early 20th century rolled 75-pound-per-yard (37.2 kg/m) steel rail, spikes, tie plates, sleepers, and other materials. Between May and September 2016 extensive grading, paving, installation of railings and other physical upgrading work was undertaken along the corridor to complete its conversion to a formal pedestrian and bike trail called the "Passy Rail Trail".

All content from Kiddle encyclopedia articles (including the article images and facts) can be freely used under Attribution-ShareAlike license, unless stated otherwise. Cite this article:
Belfast and Moosehead Lake Railroad (2009) Facts for Kids. Kiddle Encyclopedia.