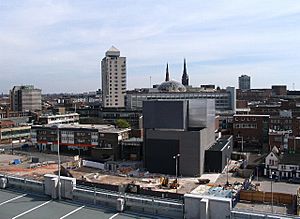 The Belgrade Plaza is a £113 million mixed-use development in Coventry city centre in West Midlands, England.

The Belgrade Plaza was built by construction firm, Oakmoor Deeley. The development had two phases. The first – a 1,100 space car park – opened in 2007. The second phase has two hotels, a casino, restaurants, bars and apartments to the area between the Belgrade Theatre and the ring road.

On 12 March 2008, construction workers at the site discovered an unexploded Second World War bomb, which had been dropped during the Coventry Blitz. The site was evacuated and a cordon of 500-metres was enforced. Many workers were forced to exit their offices and leave their vehicles in car parks overnight.

All content from Kiddle encyclopedia articles (including the article images and facts) can be freely used under Attribution-ShareAlike license, unless stated otherwise. Cite this article:
Belgrade Plaza Facts for Kids. Kiddle Encyclopedia.