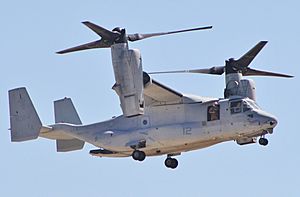 The V-22 Osprey is a tilt rotor aircraft, meaning it has 2 rotors it can tilt. This makes it so it can fly like a helicopter and an airplane. When the US Military failed Operation Eagle Claw, which was going to rescue some hostages, they wanted to get an aircraft that could take off vertically and was fast. This led to the companies Boeing and Bell Aircraft to work together to make the V-22 Osprey.

All content from Kiddle encyclopedia articles (including the article images and facts) can be freely used under Attribution-ShareAlike license, unless stated otherwise. Cite this article:
Bell Boeing V-22 Osprey Facts for Kids. Kiddle Encyclopedia.