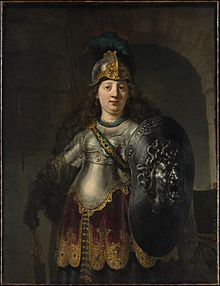 Bellona was an Ancient Roman goddess of war. She is usually shown wearing a helmet and armed with a sword, spear, or shield, and brandishes a torch or whip as she rides into battle in a four-horse chariot.

All Roman Senate meetings about foreign war were held in the Templum Bellonae.

Bellona's festival was celebrated on June 3. She was married to Mars or the Greek god named Ares 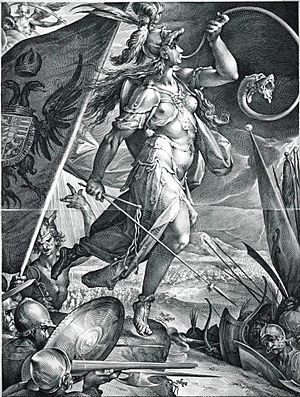 "Bellona Leading the Imperial Armies against the Turks", a 1600 print of Bartholomaeus Spranger's design

Originally named Duellona in the Italic languages, Bellona was an ancient Sabine goddess of war, identified with Nerio, the consort of the war god Mars, and later with her Greek equivalent Enyo.

Her first temple in Rome was dedicated in 296 BCE, where her festival was celebrated on June 3. Her priests were known as Bellonarii and used to wound their own arms or legs as a blood sacrifice to her. These rites took place on the 24 March, called the day of blood (dies sanguinis) after the ceremony. In consequence of this practice, which approximated to the rites dedicated to Cybele in Asia Minor, both Enyo and Bellona became identified with her Cappadocian aspect, Ma.

The Roman Campus Martius area in which Bellona’s temple was sited had extraterritorial status. Ambassadors from foreign states, who were not allowed to enter the city proper, stayed in this complex. The area around the temple of Bellona was considered to symbolize foreign soil, and there the Senate met with ambassadors and received victorious generals prior to their Triumphs.

And it was here too that Roman Senate meetings relating to foreign war were conducted. Beside the temple was the war column (columna bellica), which represented the boundary of Rome. To declare war on a distant state, a javelin was thrown over the column by one of the priests concerned with diplomacy from Roman territory towards the direction of the enemy land and this symbolical attack was considered the opening of war.

All content from Kiddle encyclopedia articles (including the article images and facts) can be freely used under Attribution-ShareAlike license, unless stated otherwise. Cite this article:
Bellona Facts for Kids. Kiddle Encyclopedia.