Bells Hill Burial Ground is a cemetery and Site of Local Importance for Nature Conservation in the Parish of Chipping Barnet in the London Borough of Barnet. It was opened in 1895 and closed in 2005 when it became full. In 2006 control was passed to Barnet Council. There is access from Spring Close.

The north-eastern end has older monuments and is wooded with mature cedar and yew trees. Wildflowers include common knapweed and lady's bedstraw, while brambles and roses climb the tombs in wilder areas. The burial ground is a very good site for butterflies, such as gatekeeper, small skipper and meadow brown. The south-western area is more managed with mown grass, and some graves have flowers. 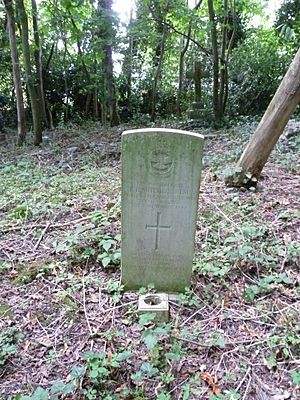 All content from Kiddle encyclopedia articles (including the article images and facts) can be freely used under Attribution-ShareAlike license, unless stated otherwise. Cite this article:
Bells Hill Burial Ground Facts for Kids. Kiddle Encyclopedia.