Kids Encyclopedia Facts
This page is about the American sentimental ballad. For other uses, see Ben Bolt (disambiguation). 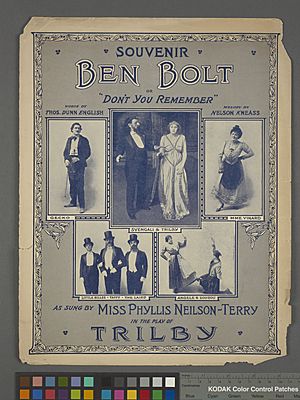 "Ben Bolt" (Roud 2653) is a sentimental ballad with lyrics derived from a poem by Thomas Dunn English. It enjoyed widespread popularity throughout the English-speaking world during the nineteenth century.

The poem, which is five stanzas long, describes nostalgic scenes from the life of the anonymous narrator. The narrator, who addresses each memory to the title character, begins the first stanza by describing the life and death of a woman named Alice.

Don't you remember sweet Alice, Ben Bolt,—
Sweet Alice whose hair was so brown,
Who wept with delight when you gave her a smile,
And trembled with fear at your frown?
In the old church-yard in the valley, Ben Bolt,
In a corner obscure and alone,
They have fitted a slab of the granite so gray,
And Alice lies under the stone.

Some variation occurs in the beginning of the poem's fourth stanza. In the original manuscript, the stanza begins as follows:

And don’t you remember the school, Ben Bolt,
With the master so cruel and grim,
And the shaded nook in the running brook
Where the children went to swim?

However, when the poem was arranged to music, the lyrics of that section were changed slightly, so that the relevant lines were as follows:

With the master so kind and so true.
And the little nook by the clear-running brook,
Where we gathered the flowers as they grew?

This mild bowdlerization met with some annoyance from the author. Thomas Dunn English, writing to Harper's Bazaar, commented: "I must protest against this change, because the school-masters of between sixty and seventy years since were, to my memory, 'cruel and grim'; they were neither kind nor true. They seemed to think the only way to get learning into a boy's head was by the use of the rod. There may have been exceptions, but I never met them."

I am feeling very well and enjoying life as well as an old man can, but this eternal 'Ben Bolt' business makes me so infernally weary at times that existence becomes a burden. The other night, at a meeting of a medical association at my home in Newark, some one proposed that all hands join in singing 'Ben Bolt,' whereupon I made a rush for the door, and came very near forgetting the proprieties by straightway leaving home. However, I recovered my equilibrium and rejoined my friends. I don't think that General Sherman ever grew half so tired of 'Marching Through Georgia' as I have of that creation of mine, and it will be a blessed relief to me when the public shall conclude to let it rest.

Shortly after being published, "Ben Bolt" vaulted to nationwide popularity, single-handedly establishing Thomas Dunn English's literary reputation and remaining relevant as a classic American song throughout the nineteenth century. It swiftly became the subject of both tribute and parody, with many sets of variant lyrics.

"Ben Bolt" had its popularity rejuvenated in 1894 when George du Maurier published his novel Trilby, which uses the song as a plot point. The title character Trilby O'Ferrall is portrayed as incapable of skillful singing when she delivers a tone-deaf version of "Ben Bolt" near the novel's beginning. Later, the failure of Svengali's hypnotic powers are revealed when Trilby is once again incapable of singing "Ben Bolt" with any degree of skill. The success of the novel and the subsequent Trilbyana craze promoted interest in the songs of Trilby. In his old age, Thomas Dunn English contributed a manuscript copy of "Ben Bolt" to an 1895 Trilby-themed charity auction for the benefit of the New York Kindergarten Association.

As a widely known song of the nineteenth century, "Ben Bolt" was popularly used as a cultural reference in books set during that era, whether published in the nineteenth century or decades later. It is quoted in the novel Dr. Sevier by George Washington Cable and by Laura Ingalls Wilder in By the Shores of Silver Lake. Leopold Bloom contemplated Ben Bolt along with other stories about long-lost loves in James Joyce's Ulysses.

James Thurber illustrated "Ben Bolt" as part of a poetry illustration series for The New Yorker.

All content from Kiddle encyclopedia articles (including the article images and facts) can be freely used under Attribution-ShareAlike license, unless stated otherwise. Cite this article:
Ben Bolt Facts for Kids. Kiddle Encyclopedia.