Ben Flower (born 19 October 1987) is a Welsh professional rugby league footballer who plays as a prop for the Leigh Centurions in the Betfred Super League, and has played for Wales at international level.

He previously played as a second-row and loose forward for Crusaders Rugby League in the Super League, and spent time away from Crusaders RL on loan at the South Wales Scorpions in Championship 1. Flower also spent 9 seasons at the Wigan Warriors in the top flight.

He notoriously punched Lance Hohaia in the face twice in the second minute of the Super League Grand Final in 2014 and faced a six-month ban.

Flower was born in Cardiff, Wales.

An under-17 international when at Cardiff Demons, Flower also played for Wales in rugby union at under 18, under 19 and under 20 level. He was signed by the Crusaders from Welsh Premiership rugby union side Bedwas RFC, having also played for regional side Newport Gwent Dragons. 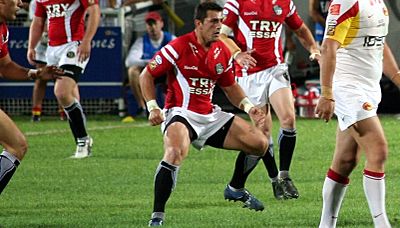 Flower playing for Crusaders RL in 2009

Flower progressed as a professional rugby league footballer throughout 2007, starting in Crusaders Colts before becoming a regular in the Crusaders first team and winning his first full Welsh cap in 2008. He played for Crusaders in their first Super League season in 2009, and remained with the club until their departure from the league in 2011, after which he signed for Wigan Warriors.

In 2010, Flower was loaned from Crusaders to South Wales Scorpions of Championship 1, and made four appearances for the club, scoring one try.

Flower made 18 appearances in his first season with Wigan.

In 2013 he established himself as a first-choice player and was a member of the team that won the 2013 Challenge Cup Final with victory over Hull F.C. at Wembley Stadium.

He played in the 2013 Super League Grand Final victory over the Warrington Wolves at Old Trafford.

Flower made his comeback against Warrington Wolves on 16 April. He was wished well ahead of his return by Lance Hohaia. He went on to make 19 appearances scoring four tries.

He played in the 2015 Super League Grand Final defeat by the Leeds Rhinos at Old Trafford.

In early February he signed a new four-year deal running till the end of 2020 despite interest from other Super League and NRL clubs. His 27 appearances across the season saw him score three tries.

He played in the 2016 Super League Grand Final victory over the Warrington Wolves at Old Trafford.

Flower helped Wigan win a fourth World Club Challenge in the 22-6 victory over Cronulla-Sutherland Sharks. He made a good start to the season before after 13 appearances he suffered an Achilles tendon injury ending his season.

He played in the 2018 Super League Grand Final victory over the Warrington Wolves at Old Trafford.

Flower played 18 games for Wigan in 2019 including their shock semi-final loss against Salford.

Flower played only nine games for Wigan in the 2020 season. In the semi-final victory over Hull F.C., Flower was taken from the field in the second half with a leg injury. He was later ruled out of the 2020 Super League Grand Final.

Flower made his Wales début against England while at Celtic Crusaders in 2008.

He represented Wales in the 2010 European Cup, and the 2011 Rugby League Four Nations, and was named in the squad for the 2013 Rugby League World Cup.

All content from Kiddle encyclopedia articles (including the article images and facts) can be freely used under Attribution-ShareAlike license, unless stated otherwise. Cite this article:
Ben Flower Facts for Kids. Kiddle Encyclopedia.