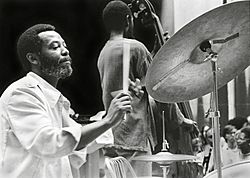 Ben Riley (July 17, 1933 – November 18, 2017) was an American jazz drummer. He was born in Savannah, Georgia. He was known for his work with Thelonious Monk, as well as Alice Coltrane, Stan Getz, Woody Herman, Eddie "Lockjaw" Davis, Ahmad Jamal, Kenny Barron, and as member of the group Sphere. During the 1970s he was a member of the New York Jazz Quartet.

All content from Kiddle encyclopedia articles (including the article images and facts) can be freely used under Attribution-ShareAlike license, unless stated otherwise. Cite this article:
Ben Riley Facts for Kids. Kiddle Encyclopedia.