Bendigo Senior Secondary College (BSSC) is an Australian government-funded co-educational secondary school for Year 11 and Year 12 students located in the centre of Bendigo, Victoria. It is the largest provider of VCE, VET and VCAL in the state of Victoria. 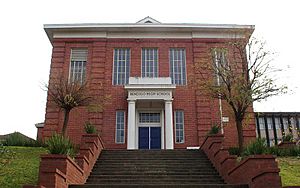 The Bendigo Continuation School opened on 27 April 1907, with the aim of preparing students for entry into the public service, teacher training, university or other education. In 1912, the school was renamed as Bendigo High School. The school incorporated nearby buildings such as the Sandhurst Corporate High School (later St Andrew's College) and eventually the James King Hall and administration block were built in 1930. The former Bendigo Supreme Court was used to serve as the music rooms when it was obtained in 1959, after the relocation of Bendigo Girls' High School. Other additions include the Alexander Wing (1967) and the Commonwealth Library (1977).

In 1991, a building program saw the construction of new buildings, with an overall upgrade all of the facilities starting from 1995. The site is listed on the Victorian Heritage Register.

In 2001, Bendigo Senior Secondary College was the first government school in the world to be accredited with the Council of International Schools. In 2011 BSSC was bench-marked again and welcomed international scrutiny.

NETschool is an extension of BSSC and offers VCE, VCAL and VET. It provides curriculum access for 15 - 18 year old students who have been outside mainstream schooling or training.

BSSC also runs an online program which they deliver the college program through. It was setup to help students in other schools in Victoria. This program is expected to continue to expand in the future.

All content from Kiddle encyclopedia articles (including the article images and facts) can be freely used under Attribution-ShareAlike license, unless stated otherwise. Cite this article:
Bendigo Senior Secondary College Facts for Kids. Kiddle Encyclopedia.