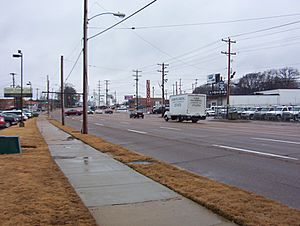 Berclair is a district of Memphis, Tennessee. It is named after a major street in this district.

Berclair is bordered by the CSX railroad to the north; Interstate 40, Covington Pike, and Stratford Road to the east; Summer Avenue to the south and Graham Street to the west.

The area was developed shortly after World War II in the same manner as Levittown, New York with many small houses for returning soldiers and their families.

Berclair originally was not a part of Memphis, but was annexed to the city in the late 1950s or early 1960s.

Waring Road, which runs through Berclair is named for George E. Waring, Jr. Waring was the innovative sanitary engineer who designed the system of drainage that ended the era of yellow fever epidemics in 19th Century Memphis.

The original Holiday Inn chain of hotels was founded in 1952 in Memphis by homebuilder Kemmons Wilson to provide inexpensive family accommodation for travelers within the USA. Wilson opened the first Holiday Inn in September 1952 at 4941 Summer Avenue in the Berclair district of Memphis on the main road to and from Nashville. Although the building is no longer in existence, a historical marker has been erected near the location.

All content from Kiddle encyclopedia articles (including the article images and facts) can be freely used under Attribution-ShareAlike license, unless stated otherwise. Cite this article:
Berclair, Memphis Facts for Kids. Kiddle Encyclopedia.