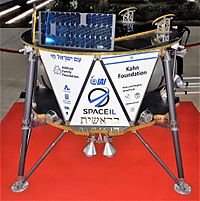 Beresheet was a demonstrator of a small robotic lunar lander and lunar probe. It was privately funded in Israel and was planned to land on the moon. The lander was known as Sparrow, and was officially named Beresheet (Hebrew: בְּרֵאשִׁית‎‎, "Genesis") in December 2018.

On 11 April 2019, the failure of an IMU unit caused a chain of events, leading to the shutoff of the main engine, which caused the lander to crash on the Moon. On 13 April 2019, Beresheet-2 was announced.

All content from Kiddle encyclopedia articles (including the article images and facts) can be freely used under Attribution-ShareAlike license, unless stated otherwise. Cite this article:
Beresheet Facts for Kids. Kiddle Encyclopedia.