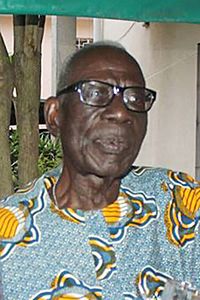 Bernard Binlin Dadié (10 January 1916 – 9 March 2019) was an Ivorian novelist, playwright, poet, and administrator. He was the Minister of Culture in the government of Ivory Coast from 1977 to 1986. He was born in Assinie, Ivory Coast. He wrote folktales about colonialism.

Dadié's works were seen in Steven Spielberg's 1997 movie Amistad where the text of Dadié's poem, "Dry Your Tears, Afrika" (“Sèche Tes Pleurs“) was used for a song of the same name.

Dadié received several awards in recognition of his literary career, with one of the last being the Grand Prix des Mécènes of the GPLA in 2016.

All content from Kiddle encyclopedia articles (including the article images and facts) can be freely used under Attribution-ShareAlike license, unless stated otherwise. Cite this article:
Bernard Binlin Dadié Facts for Kids. Kiddle Encyclopedia.