Berthierville(also called Berthier-en-haut, and legally called Berthier before 1942) is a town located between Montreal and Trois-Rivières on the north shore of the Saint Lawrence River in Quebec, Canada. Berthierville is the seat of D'Autray Regional County Municipality, and is served by Autoroute 40, and is the junction of Routes 138 and 158. It is surrounded by the parish municipality of Sainte-Geneviève-de-Berthier.

The Marie Reine du Canada Pilgrimage column stops at the church of Sainte-Geneviève de Berthierville for Mass on the first day of its three-day walk from Lanoraie to Cap-de-la-Madeleine. 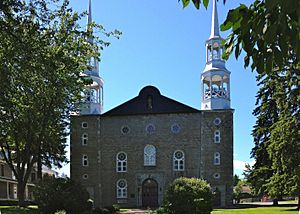 All content from Kiddle encyclopedia articles (including the article images and facts) can be freely used under Attribution-ShareAlike license, unless stated otherwise. Cite this article:
Berthierville Facts for Kids. Kiddle Encyclopedia.