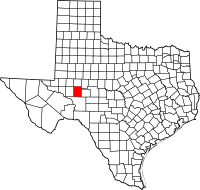 Best is an unincorporated community in southwestern Reagan County in the western part of the U.S. state of Texas. It was portrayed in the Clyde Ragsdale novel The Big Fist.

Best is located in Reagan County about 85 miles (135 km) west of San Angelo, Texas. In 2010, the town had a population of 1. It is one of the four major communities in Reagan County according to a historical guide written by the University of Texas. Best was served by the Kansas City, Mexico and Orient Railway.

Oil was discovered in the area in 1923. The town is reportedly named after Tom Best, an English stockholder of the Orient Railroad, which established a railroad switching station in the town in 1924. The town grew rapidly, reaching a population of 3,500 by 1925.

The rapid growth of the town was accompanied by a wild reputation, which was portrayed in the Clyde Ragsdale novel, The Big Fist. A commonly used slogan was coined that “the town with the Best name in the world and worst reputation.”

All content from Kiddle encyclopedia articles (including the article images and facts) can be freely used under Attribution-ShareAlike license, unless stated otherwise. Cite this article:
Best, Texas Facts for Kids. Kiddle Encyclopedia.