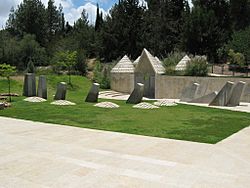 the central memorial of the Ethiopian Jews in Mount Herzl

Beta Israel Memorial is the central memorial dedicated to the Ethiopian Jews that were murdered on their way to Israel. The name "Beta Israel" is the name of the black Jewish community in Ethiopia. The memorial is located at the National Civil Cemetery of the State of Israel in Mount Herzl in Jerusalem. It was built in 2007 by the architect Gabriel Curtis. It replaced an earlier memorial that was built in 1989 for the Ethipean Jews, located in the Givat HaMatos neighborhood of Jerusalem. The memorial was built around a grass plaza with olive trees. In the entrance there is a big board that tells the story of the Jews in Ethiopia. On the edge of the plaza there are stones in the shape of graves, with names on them. Next to these, there is a stone structure in the shape of an Ethiopian village, with boards that tell the story of the Jews that were not able to get to Israel.

All content from Kiddle encyclopedia articles (including the article images and facts) can be freely used under Attribution-ShareAlike license, unless stated otherwise. Cite this article:
Beta Israel Memorial Facts for Kids. Kiddle Encyclopedia.