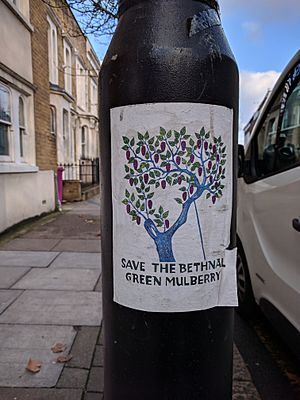 Lamppost poster from a campaign to save the Bethnal Green mulberry tree, February 2019

The site of the tree is just to the east of Bonner Road. In the mid-16th century this would have formed part of the gardens of the palace of Bishop Bonner, later known as Bishop's Hall. In the Book of Martyrs, published in 1563, the Bishop is depicted flogging a martyr next to a sapling - suspected to be the very same mulberry.

In the 17th century, Spitalfields, immediately southwest of Bethnal Green, was the centre of London's silk-weaving industry. Silk was produced from mulberry silkworms - which eat white mulberry leaves. However, a large number of black mulberries were mistakenly imported into London at the time by King James I, and the Bethnal Green mulberry tree may well be one of them.

A key piece of evidence lies in the archive of the Royal London Hospital in Whitechapel. An inkwell (a preserved slice of a tree) from 1911 is recorded as having been taken from a broken bough of a mulberry 'reputed to be that under which Bishop Bonner went to sit in the cool of the evening'.

The mulberry tree now sits on the site of the London Chest Hospital, opened in 1855 by a group of Victorian philanthropists. Nurses from the hospital reportedly danced around the tree in their leisure time.

In 1945, in the last few months of the Second World War, the tree was damaged by a bomb that fell on the London Chest Hospital. The hospital chapel was destroyed but the mulberry tree survived. Charring can still be seen on the tree today.

Since 2017 the Bethnal Green mulberry has been the subject of fierce local contention.

In April 2015 the London Chest Hospital closed and the site was purchased by a housing developer. In early 2017 the developer obtained permission from Tower Hamlets Council's Arboricultural team to relocate the mulberry tree, prior to submitting a planning application to redevelop the hospital and surrounding grounds.

The Bethnal Green mulberry is subject to a Tree preservation order, issued by Tower Hamlets Council. In 2017 a Judicial Review was brought, arguing that the age of the tree had been underestimated - that it was in fact a 'veteran' tree.

These are covered by the National Planning Policy Framework (NPPF), which states: 'development resulting in the loss or deterioration of irreplaceable habitats (such as ancient woodland and ancient or veteran trees) should be refused, unless there are wholly exceptional reasons and a suitable compensation strategy exists'.

It was argued that the risks associated with moving a veteran tree meant that permission to relocate it ought not to have been granted. Tower Hamlets Council agreed and the plans were temporarily suspended.

In a lecture on the mulberry tree given in March 2018, Julian Forbes Laird (of Forbes Laird Arboricultural Consultancy) stated that the 'proposal to relocate it is unlikely to succeed. The tree will either fall apart or die, or possibly both'.

A petition titled 'Save the Bethnal Green Mulberry' was launched in 2017 by the East End Preservation Society. It had reached 10,000 signatures by September 2018. In addition, Tower Hamlets council received three hundred letters of objection. At the time of the 2011 census there were 13,683 residents in Bethnal Green.

The planning application, including relocation of the mulberry tree, went to Tower Hamlets planning committee in September 2018. Three councillors voted to reject the plans and four voted to approve (with one abstention), and the tree was agreed be relocated to the lawn in front of the old hospital entrance.

All content from Kiddle encyclopedia articles (including the article images and facts) can be freely used under Attribution-ShareAlike license, unless stated otherwise. Cite this article:
Bethnal Green mulberry tree Facts for Kids. Kiddle Encyclopedia.