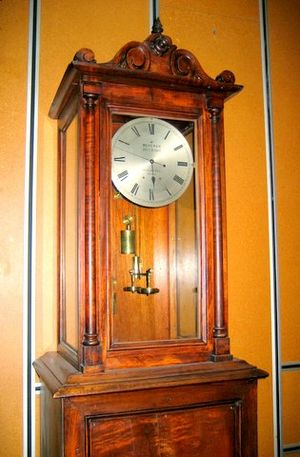 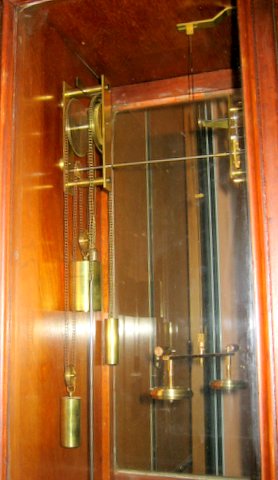 The inner mechanism of the Beverly clock showing chain, sprockets and torsional pendulum

The Beverly Clock is a clock situated in the 3rd floor lift foyer of the Department of Physics at the University of Otago, Dunedin, New Zealand. The clock is still running despite never having been manually wound since its construction in 1864 by Arthur Beverly.

The clock's mechanism is driven by variations in atmospheric pressure, and by daily temperature variations; of the two, temperature variations are more important. Either causes the air in a one-cubic-foot (28-litre) airtight box to expand or contract, which pushes on a diaphragm. A temperature variation of 6 °F (3.3 °C) over the course of each day creates approximately enough pressure to raise a one-pound weight by one inch (equivalent to 13 mJ or 3.6 μWh), which drives the clock mechanism.

A similar mechanism in a commercially available clock which operates on the same principle is the Atmos clock, which is manufactured by the Swiss watchmaker Jaeger-LeCoultre.

While the clock has not been wound since it was made by Arthur Beverly in 1864, it has stopped on a number of occasions, such as when its mechanism needed cleaning or there was a mechanical failure, and when the Physics Department moved to new quarters. As well, on occasions when the ambient temperature has not fluctuated sufficiently to absorb the requisite amount of energy, the clock will not function. However, after environmental parameters readjust, the clock begins operating again.

All content from Kiddle encyclopedia articles (including the article images and facts) can be freely used under Attribution-ShareAlike license, unless stated otherwise. Cite this article:
Beverly Clock Facts for Kids. Kiddle Encyclopedia.