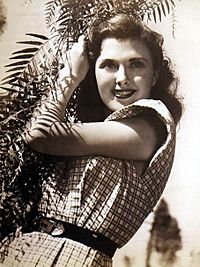 Born Beverly Jean Saul in Scranton, Pennsylvania, the daughter of a secretary, she was just a teenage girl when she had her singing debut on the localradio. A short time later she moved with her mother to Hollywood and gave her film debut in the 1943 premiere comedy comedy The Youngest Profession .

Until 1947 she worked in six feature film s and afterwards only 1950 again a film role. Her last role in a feature film was in the 1958 premiere Thriller Hong Kong Confidential.

Between 1956 and 1961 she also co-operated in various television series; Including the episode When Mr. Twilight Died (original title: Vengeance ) of the Western series Bonanza . Her last appearance in front of the camera was in a Thanksgiving themed episode of the TV series Hazel .

In the context of her marriage to Jim Jordan Jr. on May 6, 1962, she completed her career as a film actor and later appeared only on stage at supper clubs and playhouses in Reno, Nevada throughout the 1980s.

Tyler died on 23 November 2005 at the age of 78 years following a lung embolism and was laid to rest in Our Mother of Sorrows Cemetery in Reno, PA.Resting Places: The Burial Sites of More Than 14,000 Famous Persons, 3d ed.

All content from Kiddle encyclopedia articles (including the article images and facts) can be freely used under Attribution-ShareAlike license, unless stated otherwise. Cite this article:
Beverly Tyler Facts for Kids. Kiddle Encyclopedia.