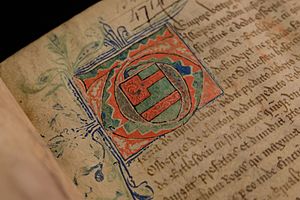 Biddlesden was a Cistercian abbey founded in 1147 by Arnold de Bosco (de Bois), steward to the Earl of Leicester. Abbot William Wibert was deposed in 1198 for fraud, gross immorality and bribery. In the 14th to 15th centuries there was a long running dispute with the parish of Wappenham concerning the collection of tithes. It was never a wealthy house for most of its history and would have been dissolved in 1536 if the monks had not petitioned, and paid, for its continuation. The monastery was finally surrendered in September 1538 and became the possession of Thomas Lord Wriothesley.

In the 1730s, the ruins of the abbey were demolished and a house built upon the site, Biddlesden Park House, now a grade II listed building. A few stones from the abbey remain but not in situ.

All content from Kiddle encyclopedia articles (including the article images and facts) can be freely used under Attribution-ShareAlike license, unless stated otherwise. Cite this article:
Biddlesden Abbey Facts for Kids. Kiddle Encyclopedia.