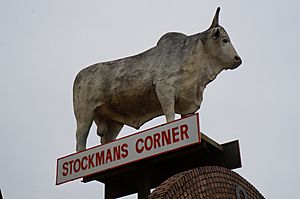 The Big Bulls are a set of seven large statues of bulls that decorate the city of Rockhampton, Queensland, Australia. The set is regarded as one of Australia's big things and is intended to reinforce Rockhampton's claim to being the Beef Capital of Australia. Initially there were two bull statues but over time others were added reaching a total of seven. Five of the bulls were created by sculptor Hugh Anderson.

Some residents also feel that the bull statues over-emphasise one aspect of the city and should be relocated to less prominent locations. However, there is strong public support for the retention of the bulls.

The first six bull statues are located near highways and major roads and were built to be realistic depictions of breeds of cattle raised in the area; the seventh was constructed as an art work for display at the Rockhampton Art Gallery. The bull statues are:

Plaque listing (53 donors). In recognition of the contribution Santa Gertrudis have made to the beef industry.  ::Arranged by Burnett Joyce. Opened by the mayor Ald. Jim Webber, 18 September 1985. 'Thanks to those who made it possible'

Plaque: Romagnola Breeders' Society Ltd. has given this statue of a romagnola bull to the City of Rockhampton to commemorate the World Romagnola Congress. Unveiled by His Worship the Mayor Councillor James McRae on 13th April 1997

Plaque: Rockhampton. The Beef City. This sculpture financed by (29 donors). Dedicated by the Honourable V. B. Sullivan M.L.A., Minister for Primary Industries on 16th. November 1978

Plaque: Rockhampton. The Beef City. This sculpture financed by (40 donors). Dedicated by the Honourable V. B. Sullivan M.L.A., Minister for Primary Industries on 16th. November 1978

Within Rockhampton, there are other bull statues, including:

All content from Kiddle encyclopedia articles (including the article images and facts) can be freely used under Attribution-ShareAlike license, unless stated otherwise. Cite this article:
Big Bulls Facts for Kids. Kiddle Encyclopedia.