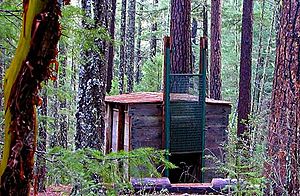 What is believed to be the world's only Bigfoot trap is located in the Siskiyou National Forest in the southern part of Jackson County, Oregon, a few miles from the California state border. It was designed to capture a Bigfoot (or Sasquatch), the legendary hominid that is said to live in the forests of the Pacific Northwest.

The trap is a wooden box 10 by 10 feet (3 by 3 m) made of 2x12 planks bound together by heavy metal bands and secured to the ground by telephone poles. A Forest Service special use permit was issued for its construction, but the door has been bolted open since 1980. Its location was originally remote and predicted to be a good place for a Bigfoot migration, but since the construction of the Applegate Dam, a road is now near the trap.

The trap was built in 1974 by the North American Wildlife Research Team (NAWRT), a now-defunct organization based in Eugene, Oregon, that was inspired to build a trap at the location by Perry Lovell, a miner who lived near the Applegate River, who claimed to have found 18-inch-long human-like tracks in his garden. NAWRT operated the trap, keeping it baited with carcasses for six years, but caught only bears.

Since then the trap had been abandoned and started to deteriorate. In 2006 the United States Forest Service, under the Passport in Time program, began to repair the trap. The trap has become a tourist attraction over the past 30 years and hundreds of people visit it annually. At least one film has been shot on site.

The Forest Service keeps an eye on the device, but otherwise does not maintain it.

The Collings Mountain hiking trail passes by the Bigfoot trap.

All content from Kiddle encyclopedia articles (including the article images and facts) can be freely used under Attribution-ShareAlike license, unless stated otherwise. Cite this article:
Bigfoot trap Facts for Kids. Kiddle Encyclopedia.