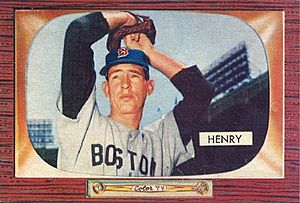 William Rodman "Bill" Henry (October 15, 1927 – April 11, 2014) was an American professional baseball left-handed pitcher. He played in Major League Baseball (MLB) between 1952 and 1969. All the teams he played for were: the Boston Red Sox, the Chicago Cubs, the Cincinnati Reds, the San Francisco Giants, the Pittsburgh Pirates, and the Houston Astros. He was born in Alice, Texas.

All content from Kiddle encyclopedia articles (including the article images and facts) can be freely used under Attribution-ShareAlike license, unless stated otherwise. Cite this article:
Bill Henry Facts for Kids. Kiddle Encyclopedia.