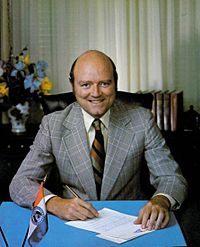 William Cunningham Phelps (April 5, 1934 – March 19, 2019) was a Republican politician and lawyer. Phelps was born and raised in Nevada, Missouri. He was the Lieutenant Governor of Missouri from 1973 to 1981.

All content from Kiddle encyclopedia articles (including the article images and facts) can be freely used under Attribution-ShareAlike license, unless stated otherwise. Cite this article:
Bill Phelps Facts for Kids. Kiddle Encyclopedia.