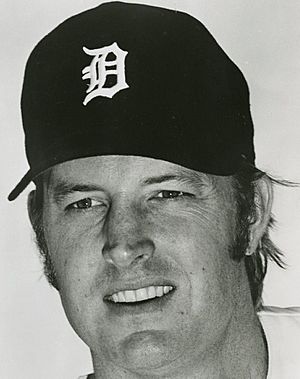 William Grover "Bill" Slayback (February 21, 1948 – March 25, 2015) was an American professional baseball pitcher. He appeared in 42 games, 17 as a starter for the Detroit Tigers of Major League Baseball (MLB) from 1972 until 1974. He later became a musician and singer-songwriter, releasing several singles such as "Move Over Babe (Here Comes Henry)".

Slayback was born in Hollywood, California. He had two daughters, Samantha and Kelli.

Slayback died on March 25, 2015 at his home in La Crescenta-Montrose, California, aged 67. He had been ill for some years before his death.

All content from Kiddle encyclopedia articles (including the article images and facts) can be freely used under Attribution-ShareAlike license, unless stated otherwise. Cite this article:
Bill Slayback Facts for Kids. Kiddle Encyclopedia.