Bionic Six is an American-Japanese animated television series that aired from 1987 to 1989. It was produced by TMS Entertainment and distributed, through first-run syndication, by MCA TV, years before the latter company became NBCUniversal Television Distribution. Renowned Japanese animation director Osamu Dezaki was involved as chief supervising director, and his distinctive style (as seen in Golgo 13 and Cobra) is evident throughout all its episodes.

The title characters of the series are a family of machine-enhanced human beings possessing unique powers after being augmented with bionic technology. Each family member is given specific bionic powers, and thus they form a superhero team called the Bionic Six.

The series was initiated as a direct sequel to The Six Million Dollar Man and The Bionic Woman and was originally to be about the Austin family. This was changed early on in preproduction for creative reasons.

In the near future (some unspecified decades after 1999), Professor Dr. Amadeus Sharp Ph.D., head of the Special Projects Labs (SPL), creates a new form of technology to augment humans through bionics. His first subject was Jack Bennett, a test pilot who secretly acted as Sharp's field agent, Bionic-1. On a family ski vacation in the Himalayas, an alien spacecraft triggers an avalanche that buries the entire family, exposing them to the unusual radiation of a mysterious buried object. Jack frees himself but discovers his family in a comatose state. Theorizing that Jack's bionics protected him from the radiation, Professor Sharp implants bionic technology in the others, awakening them. Afterward, the family operates incognito as a publicly lauded team of adventuring superheroes, the Bionic Six.

The primary antagonist of the series is a mad scientist known as Doctor Scarab, along with his gang of henchmen – Glove, Madam-O, Chopper, Mechanic, and Klunk – accompanied by Scarab's legion of drone robots called Cyphrons. Scarab is Professor Sharp's brother. Obsessed with obtaining immortality and ruling the world, Scarab believes that the key to both goals lies in the secret bionic technology invented by his brother, ever plotting to possess it. 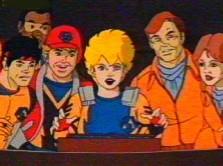 The Bennett family includes patriarch Jack, matriarch Helen, Eric, Meg, J.D., and Bunji. They live in a secluded oceanfront home in the fictional city of Cypress Cove, in northern California. Each member wears a special ring and a "wristcomp" (a mini-computer hardwired into the wrist), which they use to activate their bionic powers. The Bionic Six can also combine their powers by joining hands, creating a "Bionic Link" to amplify their abilities.

The primary antagonist of the series is Dr. Scarab – real name Dr. Wilmer Sharp Ph.D., who is Amadeus Sharp's brother. Scarab is a hefty, egotistically brilliant and occasionally comical man who yearns for the secret to eternal life and world domination. His right eye has been modified with a monocle that has a low-powered scanner that can detect individuals with bionics, even when they are disguised, and a destructive, high-powered beam. In rare instances throughout the series, he seemingly demonstrates superhuman, bionic strength of his own (on at least one occasion, he picked up Mother-One effortlessly and threw her around; in another instance, he was seen carrying as much solid gold out of Fort Knox as his other bionic minions–several hundred pounds' worth.)He was voiced by Jim MacGeorge, who imitated the voice of George C. Scott when providing that character voice.

Dr. Scarab has assembled a motley team of henchmen (described below), imbued with an apparently lesser form of the same bionic powers employed by the Bionic Six. (Another one of Scarab's goals in the series is to try to figure out the secrets behind his brother's superior bionics knowledge.)

Dr. Scarab has tried to create additional minions with limited success, usually due to envying interference from his existing henchmen. Some of these include:

Where covert action is called for, Scarab and his gang go disguised via their "Bionic Masking Units." To disengage these electronically imparted disguises, they slam their fists to their chest insignias and exclaim, "Hail Scarab!" (Scarab, however, vainly exclaims, "Hail me!"). Doing so serves a secondary purpose  – the activation of a temporary strength enhancement.

In addition to his henchmen, Scarab also uses robots of his own design, called Cyphrons, in battles against the Bionic Six. The Cyphrons are, like the rest of his minions, generally incompetent but dangerous in large numbers. Attempts by Scarab to create more advanced Cyphron units are shown to backfire.

The first season of Bionic Six introduces viewers to the Bennett family, and to Scarab and his goons. Karate-1's origin is explored, and the mystery of his missing father is introduced. The origin of both the Bionic Six and of Scarab and his lackeys is revealed early on in the 22-episode run. The supporting characters of Dr. Fish and Perceptor are also introduced.

The second season continues on from the first seamlessly. Old supporting characters like Perceptor and Dr. Fish return, and new characters, such as the Bandroids are brought aboard. The second season includes a two-part episode titled "I, Scarab," wherein Professor Sharp assembles a second Bionic Six group to rescue the original team. This second team is made up of supporting characters from prior episodes: Kaleidoscope, Perceptor, and the Bandroids.

The series finale finds several of the members from the Bionic Six trapped for a time in a dimension where the "cartoon characters" (with an animation style highly reminiscent of Tiny Toons and Animaniacs, an animated series TMS would, during this time, soon work on) of their favorite TV shows exist; after I.Q., Rock-One and Karate-One escape, I.Q notes that in the cartoon dimension, the characters were unaware that they were imaginary characters; he then wonders if it is at all possible that he and everyone else in the "real" world are cartoon characters themselves. His family dismisses his thoughts as meaningless babble – as a bunch of characters from the cartoon dimension walk outside the Bennett family's residence and break the fourth wall as the episode fades out.

Produced by LJN in 1986, the line consisted of 13 figures (Jack, Helen, J.D., Eric, Meg, Bunji, F.L.U.F.F.I., Doctor Scarab, Glove, Mechanic, Madame-O, Chopper, and Klunk), five vehicles and one playset. These figures and vehicles were made up of plastic and die-cast metal with some of the figures having transparent limbs. The 13 figures were designed and copyrighted by Paul Samulski on behalf of LJN. F.L.U.F.F.I. the robot ape was difficult to find early in the show's release, but became easier to come by later as the line lost popularity. Today, the line remains moderately collectible with the playset and vehicles being the hardest to come across.

All content from Kiddle encyclopedia articles (including the article images and facts) can be freely used under Attribution-ShareAlike license, unless stated otherwise. Cite this article:
Bionic Six Facts for Kids. Kiddle Encyclopedia.