Bipasha Hayat (born 23 March 1971) is a Bangladeshi actress, model, painter and playback singer. She won Bangladesh National Film Award for Best Actress for her performance in the film Aguner Poroshmoni (1994). She earned Meril Prothom Alo Awards in 1998, 1999 and 2002.

Hayat completed her master's from the Faculty of Fine Arts, University of Dhaka in 1998.

During the 90's Hayat played many popular television dramas. She wrote her first TV play "Shudhui Tomake Jani" in 1997.

She acted in two liberation war related movies Aguner Poroshmoni and Joyjatra. The first of those which was directed by Humayun Ahmed, she portrayed the role of a young girl who was blocked in her house with her family inside the city of Dhaka. Ratri as her characters name fell in love with a guerrilla freedom fighter (played by Asaduzzaman Noor) who lived in their house during the war for shelter. Her affection towards the fighter reflects the support and contribution of the civilians to the guerrilla fighters of the war. In Joyjatra, her character was much more different as she acted as a middle-aged mother who lost her son as she tried to escape from an army attack. 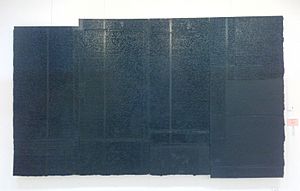 Hayat married Tauquir Ahmed, an actor and film director. She is the daughter of actor and director Abul Hayat. Her sister Natasha Hayat and brother-in-law Shamim Shahed Khan both have acting careers. Bipasha and Natasha invested on a boutique house in 2008. She has a daughter named Arisha Ahmed and a son named Aareeb Ahmed.

All content from Kiddle encyclopedia articles (including the article images and facts) can be freely used under Attribution-ShareAlike license, unless stated otherwise. Cite this article:
Bipasha Hayat Facts for Kids. Kiddle Encyclopedia.