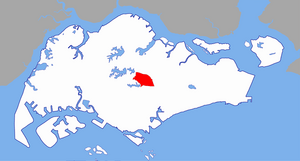 Bishan is found in the central part of Singapore

Bishan is a town in Singapore. It is in the middle of Singapore. A lot of people live in Bishan. Houses in Bishan are expensive, because it is near the city.

Bishan is called Bishan because in the past, it used to be a Cantonese cemetery called Peck San Theng (simplified Chinese: 碧山亭; pinyin: bìshántīng), which means "pavilions on the hill". This cemetery was made in 1870, but recently the government developed this place, so many people live in Bishan now.

Bishan is next to the Central Expressway (CTE), so people all over Singapore can come to Bishan using the CTE. Bishan also has its MRT station called Bishan station. Bishan also has a bus interchange, where people can change to many buses they may want to change to.

Bishan has many schools. There are 4 primary schools, 7 secondary schools and one post-secondary technical education institute. The most famous school in Bishan is Raffles Institution, which is a secondary school and junior college.

All content from Kiddle encyclopedia articles (including the article images and facts) can be freely used under Attribution-ShareAlike license, unless stated otherwise. Cite this article:
Bishan Facts for Kids. Kiddle Encyclopedia.