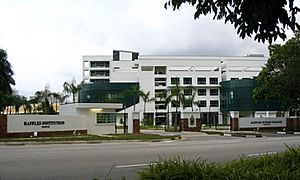 When Stamford Raffles held the torch

We faced the challenge of the day

To give our school a name

The eagle eye and gryphon strength

They led us to the fore

To reign supreme in ev'ry sphere

The sons of Singapore

Come heed the call Rafflesians all

And let our hearts be stirring

We'll do our best whate’er the test

And keep our colours flying

With one voice make us pray

With God to guide the way.

Although the anthem refers to Prometheus and God, the school is secular. The inclusion of Prometheus is due to the literary allusion to passing the torch, signifying the importance of education while 'God' in this context is a historical legacy of the school's British roots. The current recording of the anthem is in the key of G Major.

The gryphon - the purple-headed animal at the top of the crest - means stability and success. The lower half of the gryphon that looks like a lion means that RI is in Singapore, since Singapore also has a Lion symbol.

The school's motto, on the banner below the shield - Auspicium Melioris Aevi - is Latin, and mistranslated by the school as "Hope for a Better Age".

RI has won many awards from the Ministry of Education (MOE). RI has also won the School Excellence Award, the best award from MOE.

Secondary 1 students attend a camp in January when they come into RI. The camp is 3 days long. Some Secondary 4 students accompany them. There are many activities during the camp to break the ice, build bonds with classmates, and develop the RI school spirit. After the camp, the Secondary 1 students are given the RI badge by either their teachers or student leaders. Then, they are full-fledged RI students.

Secondary 3 students attend a 5 day long camp in January too. The location is not fixed but some examples would be Sentosa, and Pulau Ubin. When they come back, they can wear long pants.

RI is 12 hectares big. There are six blocks in RI.

The Science Hub has many Science labs. They are in Administrative Block One and also the Science Block.

There are normal labs for Science lessons and special labs for people to do researchTh. The HOD/Science office is also in the Science Hub.

The Science Hub was finished in October 2008. A ceremony was held to celebrate this.

The Humanities Hub contains classrooms for History, Geography and Literature. There will also be two circular theaters for people to speak or perform. It was temporarily open to the public on 23 May 2009.

RI has many infocomm facilities. Infocomm is about computers. There are four computer labs, one Internet Lab for people to see how the Internet works, one Robotics Lab and one Macintosh Lab, which has special computers.

The Junior Block, currently known as Sheares Block, was built in 1997. There are four floors. There are:

The Sheares Block has a retractable roof, which means the roof can be opened.

The ArtSpace was formerly called the Design Centre. It comprises various facilities. The first floor houses the art galleries, classrooms, jamming studio, music keyboard laboratory, a Macintosh Lab, a drawing studio and a ceramics studio. The gymnasium, comprising training areas for gymnastics, table-tennis and judo, occupies the second floor, while lock-ups for the Uniformed Groups and the Guitar Ensemble are located on third level. The roof of the ArtSpace houses the school's mini-weather station.

All content from Kiddle encyclopedia articles (including the article images and facts) can be freely used under Attribution-ShareAlike license, unless stated otherwise. Cite this article:
Raffles Institution Facts for Kids. Kiddle Encyclopedia.