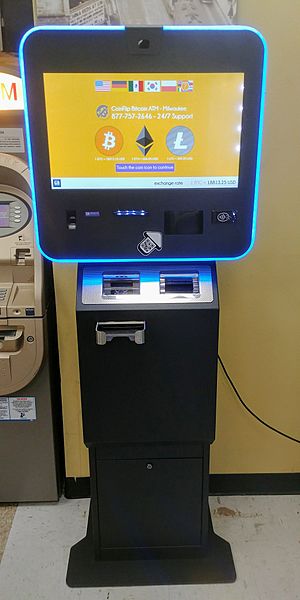 Cryptocurrency ATM in Peoria, Illinois. This model is a "two-way", meaning users may buy or sell Bitcoin and other cryptocurrencies.

A Bitcoin ATM (Automated Teller Machine) is a kiosk that allows a person to purchase Bitcoin and other cryptocurrencies by using cash or debit card. Some Bitcoin ATMs offer bi-directional functionality enabling both the purchase of Bitcoin as well as the sale of Bitcoin for cash. In some cases, Bitcoin ATM providers require users to have an existing account to transact on the machine.

There are two main types of Bitcoin machines: unidirectional (one-way) and bidirectional (two-way). Only about 30% of all crypto ATMs worldwide are bidirectional, and less than 23% in the U.S. Both types are connected to the Internet, allowing for cash purchase and/or sale of Bitcoin. Some machines use a paper receipt and others move money to a public key on the blockchain. Bitcoin cash kiosks look like traditional ATMs, but do not connect to a bank account and instead connect the user directly to a Bitcoin wallet or exchange. While some Bitcoin ATMs are traditional ATMs with revamped software, they do not require a bank account or debit card. On average, transaction fees are 10-20% but can go as high as 25% and as low as 7%.

On October 29, 2013, a Robocoin machine opened in the Waves coffee shop in downtown Vancouver, Canada. This machine is understood to be the world's first publicly available Bitcoin ATM. Robocoin ceased operations in 2015. The first machine in the United States went online on February 18, 2014, in a cigar bar in Albuquerque, New Mexico. It was removed 30 days later. On December 8, 2013, Europe's first Bitcoin ATM was installed in Bratislava, Slovakia.

Canada approved regulation of cryptocurrencies in 2014, and was the first country to do so, although it took some time to enforce. In February, 2014, the Canadian Finance Minister mentioned plans to introduce anti-money laundering and anti-terrorist financing regulations for virtual currencies such as Bitcoin. In June of that year, the Governor General of Canada approved an amendment to Bill C-31 that would treat cryptocurrency businesses as MSBs, and The Canadian Department of Finance circulated a draft of the proposed regulations in June 2018, but the law was not in Regulations or in effect as of January 2019. However, as of July, 2020, businesses dealing in virtual currencies are now considered Money Services Businesses (MSBs) by FINTRAC, the Financial Transactions and Reports Analysis Centre of Canada.

In 2018, the Canada Revenue Agency (CRA) commissioned an investigation on Bitcoin ATMs to find out if tax laws were being followed by users. It was found that in a two-month period, from December, 2017, to February, 2018, the number of Bitcoin ATMs in Canada had increased by 20%. In June 2019, Vancouver, BC—the very city where the world's first Bitcoin ATM had been installed six years earlier—was considering a ban on the machines due to money-laundering concerns, according to The Star.

According to Coin ATM Radar, there were more than 2,342 Bitcoin ATMs in the United States as of January 2018, with some small shop owners earning a reported $300 a month for rental space. By August 2020, the number of crypto ATMs had more than tripled, to over 9,000. Transactions fees for ATM use are approximately 16 percent, while online transaction fees run about 7.5 percent. Some bitcoin ATMs operating in the US are imported from other countries; for example, Czech company General Bytes has placed its machines in Las Vegas and other American cities.

Bitcoin ATM operators need to adjust the limits on deposits and withdrawals according to AML/KYC standards applicable in the jurisdiction where their ATMs are placed. In some countries / states this requires a money transmitter license.

All content from Kiddle encyclopedia articles (including the article images and facts) can be freely used under Attribution-ShareAlike license, unless stated otherwise. Cite this article:
Bitcoin ATM Facts for Kids. Kiddle Encyclopedia.