Bizarro, formerly known as Medusa, is a steel roller coaster located at Six Flags Great Adventure in Jackson Township, New Jersey. Manufactured by Bolliger & Mabillard, the ride debuted as the world's first floorless roller coaster on April 2, 1999. It was repainted and rethemed at the end of the 2008 season, reopening in 2009 as Bizarro.

Medusa was part of a $42 million expansion at Six Flags Great Adventure announced in January 1999, and was one of three roller coasters introduced in the expansion. The ride officially opened on April 2, 1999 as the first Floorless Coaster in the world.

On October 23, 2008, Six Flags announced that Medusa would be re-designed for the 2009 operating season. On April 1, 2009, Six Flags officially announced the details of Bizarro. Although no changes were made to the track layout, a new theme highlighting Superman's evil clone, Bizarro, was added. The track was repainted blue with dark purple supports and multiple special effects were added such as rings in the shape of Bizarro's S shield that the train passes through, and flame effects. The three trains also received on-board audio. Six Flags introduced an "alternate reality game" to market the re-themed ride. Bizarro opened on May 23, 2009, at the start of Memorial Day weekend.

Once the train is loaded and secured, the floor drops and the front bars that block the train from leaving while loading, open. After leaving the station, the train makes a U-turn to the left and begins to climb the 142-foot (43 m) tall chain lift hill. Once riders reach the top, they go through a small pre-drop before dropping 132 feet (40 m) to the left at a 55-degree angle. The train then reaches a top speed of 61 mph (98 km/h) and passes through several fogged Bizarro's S shields. Riders then enter the 114-foot (35 m) vertical loop followed by a turn to the right into the 96-foot (29 m) diving loop. Upon exiting the diving loop there is a burst of fire shot out on each side of the track. After the diving loop, the train passes the station and goes through a Zero G roll. The train then goes through a cobra roll, followed by a mid-course brake run which is located next to the lift hill. Similar to the first drop, the train drops to the left and enters a 270-degree helix followed by the two Interlocking corkscrews. The corkscrews interlock around a mist which sprays the riders with water. Riders go through a small dip then enter the final brake run before returning to the station. Once returned, the floors come back up and the bars close back up enabling riders to unload and next ones to load. 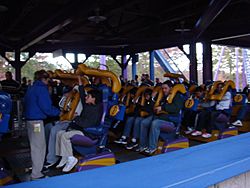 Bizarro operates with three steel and fiberglass trains. Each train has eight cars that have four seats in a single row. When the ride was re-themed, the middle two seats of the last row were removed on each train to install a computer and power module for the on-board audio. This reduced the capacity of the trains from 32 to 30 riders per train. Each seat on every train has a speaker to the left and right of the rider. A recording of a montage of movie quotes is played for the duration of the ride. Frequently, while the train is braked, waiting to enter the station platform, riders hear Bizarro chanting his name and "Bizarro #1". For the 2013 season, the on-board audio speakers and the computer module were removed; this returned the train's capacity back to 32. By late-2013, Six Flags proposed that the audio equipment would be given to Six Flags America so that the park's stand-up roller coaster Apocalypse could be fitted with an audio track for the 2014 season.

All content from Kiddle encyclopedia articles (including the article images and facts) can be freely used under Attribution-ShareAlike license, unless stated otherwise. Cite this article:
Bizarro (roller coaster) Facts for Kids. Kiddle Encyclopedia.